Almost everyone who took out a mortgage before 2009 could have profitably refinanced in 2011, 2012, or 2013. Mortgage interest rates dropped substantially from 2009 to 2013, so a homeowner is certain to pay less by getting a new mortgage than in sticking with the old mortgage. The cost of refinancing is generally about 1 percent of the total amount you are borrowing, but with a drop of 1 to 2 percentage points in the mortgage interest rate, refinancing will pay for itself within a year. So, why doesn’t everyone refinance? Part of the reason is that in the financial crisis, the value of many homes declined sharply, and banks will not refinance a mortgage loan for more than the home is worth. These days, banks are generally willing to only refinance your mortgage up to 80 percent of the home’s value, so the decline in home prices means that many homeowners will not be able to refinance their mortgages.

In the previous blog, I showed you data on mortgage interest rates. But inflation has distorted some of the movements of these interest rates over time. You see much higher interest rates in the late 1970s and early 1980s than in other periods, which was caused by the higher inflation in that period. If we adjust for the difference in inflation by subtracting from the interest rate a measure of expected inflation, then we get a more accurate view of the cost of borrowing for a home, as the chart here shows. 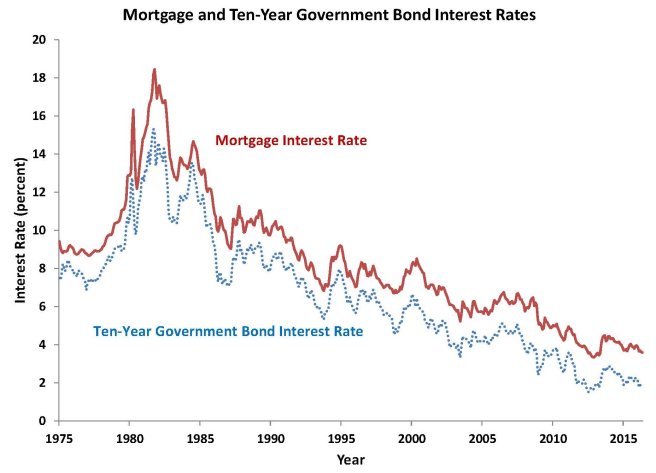 Chart: U.S. Household Mortgage Debt as a Percent of GDP

The data in Chart 2 can also be used to answer the question: is investing in a home a good financial investment? The answer is a clear NO! Using the data and calculating the inflation-adjusted annual return on homeownership, from 1975 to 2015, home prices rose only 1 percent per year, far less than stocks and bonds over the same period. Even at their peak in 2006, inflation-adjusted home prices had appreciated only 2 percent per year. So, if you buy a home, you are buying it because it provides shelter, not because it is a great financial investment.

In the housing bubble in the early to mid-2000s, sensible ideas about how much debt a home buyer should take on were ignored by everyone—bankers and homeowners. Both foolish lenders and greedy homeowners were swayed by the fact that home prices had been increasing substantially over the past 10 years. If we look at Chart 1 showing quarterly data on national housing prices, you can see why they might be fooled. The chart plots a measure of prices of homes nationwide from 1975 to 2015. In the chart, you can see that until 2007, national house prices had never declined for more than one quarter in a row, and had increased in every year; so both lenders and homeowners were fooled into thinking that homes were a safe asset. Second, the appreciation in house prices from 2000 to 2005 averaged 8% per year. This led lenders and homeowners into falsely thinking that a homeowner’s income and ability to pay were no longer relevant. After all, if the home appreciated by 8% per year, it would be easy to sell the home and pay off the mortgage without a loss to either side. So, lenders started making sub-prime loans, which allow people to qualify for loans at percentages well below standard rules, such as those that limit the monthly housing payment to be less than 28 percent of a household’s income, and limit the total of a household’s monthly housing payment and payment on other debts (credit cards or student loans) to be less than 36 percent of its income. Some loans were even known as NINJA loans (because the homeowner had No Income, No Job, and no Assets). Those loans relied entirely on the appreciation of the home to be valid; as the home appreciated in value, the homeowner would borrow even more to pay off the original mortgage loan. But all of this sub-prime lending turned out to be foolish because it relied on the continued appreciation of house prices. When home prices began to decline in 2007, panic set in. Everyone began to realize that these loans would never be paid off. The worst part of the story is that sub-prime loans had the potential to greatly increase the homeownership rate among low-income households, but after the bubble burst, that dream vanished. So, the main benefit of allowing sub-prime lending in the first place, which was to increase homeownership among the poor, actually made things worse. 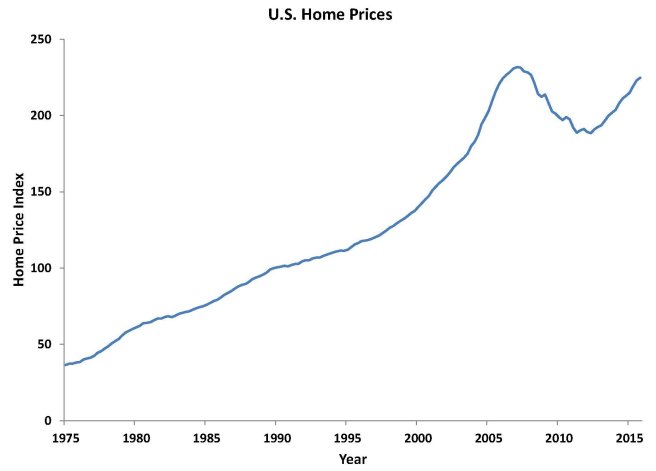 This is a blog with ideas for a book on using economics in daily life. The idea is that many people could benefit from ideas and data known by economists, but we economists do not always communicate them in ways that people can understand. Economists tend to talk to each other, instead. So, this blog is my attempt to remedy that. I’m starting with discussions about housing and mortgages.